So, I got this Google-branded lip balm from the Google Store. I couldn’t resist it—it just seemed like such a kooky thing for them to brand. After getting it, I feel like Google might be approaching some sort of critical mass, and that they could be in danger of losing control of their trademark. Is […]

So, I got this Google-branded lip balm from the Google Store. I couldn’t resist it—it just seemed like such a kooky thing for them to brand. After getting it, I feel like Google might be approaching some sort of critical mass, and that they could be in danger of losing control of their trademark. Is this a trademark lawyer’s nightmare? 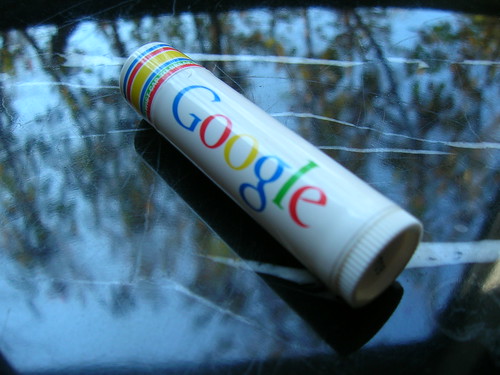 I know they likely had these Google-branded lip balms made to use as tchotchkes—the little give-aways that companies hand out at their booths at conferences, and so they could give them to visitors at their headquarters in Mountain View.

But, the lip balm made me immediately realize: Google is on everyone’s lips already! So, Google lip ice seems heavy-handedly overstated.

The news is full of Google every week, and everyone’s always asking one another, “Did you look for it on Google?” Sure, I get more of this because I’m in the internet industry, but even considering that, I see and hear so much about Google all over the place that their name recognition must be rising by the minute.

I was attending the nanoTX conference on nanotechnology just a few weeks ago, and to my surprise, I heard Google mentioned right and left. This is sorta surprising because academics and engineers are pretty restrained about endorsements and expressing enthusiasm about commercial products. In one preso, a tech company executive was pointing out how in the classic science fiction film, 2001: A Space Odyssey, he thought it was perhaps the first futuristic film that broadly displayed all these corporate logos— logos for companies like Bell, which everyone sorta assumed would live on forever. He said that most of those companies no longer exist under those names, and they’ve now been replaced in the zeitgeist with companies like Google and Microsoft.

In yet another presentation, an academic scientist mentioned a factoid and said he’d “looked it up in the ‘source of all knowledge’—Google.” Wow! Is that not a fascinating statement, or what? He said it with a somewhat tongue-in-cheek tone, but all the same he was seriously expressing admiration for the search engine and how easy it is to find information through it.

The word “Google” has now become ubiquitous—it’s showing up everywhere and its saturation into our culture is continuing to ramp up. The productization of Google as a fantastic and life-altering commercial service really reminds me somewhat of a fictitious product dreamed up in the old Philip K. Dick novel, Ubik. In the novel, there is this weird product provided in an aerosol spray can, named, appropriately enough, “Ubik,” which preserves and restores life/existence. The characteristics that seem somewhat similar between Google and the fictitious Ubik is that both are commercial products that are fundamentally impacting reality while people seem to get increasingly loose about what their names mean and how they can be applied in communication. Ubik was a product in a spray can, a religion, a savior, and a technology miracle—all rolled into one.

The parallels with Ubik continue because Google company employees and other devotees for the search engine have a tendency to wax a bit philosophical in their fervor of the service, and there’s some distinct religious overtones associated. This is encouraged by a somewhat cult-like corporate culture encouraging a near-familial devotion, coupled with a “Do No Evil” core principle that smacks of being a new-age version of one of the ten commandments.

Google’s also used as a verb, “to Google” someone or something. “Did you Google it?” people are always asking one another.

A major faction of the Googlers would appear to really want all this to continue in the current trend. Heck, Google not only wants to be ubiquitously present in all internet business and software as well as being on gas pumps and in your cell phones and conversations, but they are apparently also interested in getting Google surgically implanted into your head! (No, I’m *not* making this up just to be dramatic!) Apparently the end-goal is to have us all become Google, in some borg-like fashion.

Google is becoming such a widely-known name that the biz lawyer side of my brain has started to finally squeal out an alarm klaxon: if they don’t damp this down or standardize references to Google just a bit, the word “Google” might irretrievably enter the public domain!

I’ve often admired Google’s atypical willingness to play around with their logos—they alter them for all sorts of holidays and observances, and I always thought this was still legally enforcible—I think they can get away with this and still protect their brand name. After all, the word itself could be the trademark, so the visual representation could perhaps change all the time without them losing trademark status. But, what happens if they call nearly everything “Google”? Now Google is lip balm and server hardware and a search engine and a company and a verb form and even a dance.

The verb usage is perhaps the most dangerous part of this intellectual property morass. If a major brand name becomes considered generic—if it begins to be used commonly to communicate about general things rather than a specific company and its products—that brand name enters the public domain and can be legally used by anyone. Xerox was a good example of this sort of danger— a lot of people started to call any photocopying “xeroxing,” though Xerox company fought this trend and worked to protect their brand to keep it from happening.

The intellectual property lawyers in classic, old-school corporate practice are typically very restrictive about use of the brand elements, just for this very danger of genericide. In business law 1.0, brand names must never be allowed to be used as verbs—official company documentation can’t include verb uses, and you must discourage others from using your brand name this way, too, perhaps sending them nice, certified letters telling them to stop it. Also, the old-school approach says that you’ll create “brand guidelines,” “usage rules,” logo display requirements, and collateral style guides restricting how the logo is communicated, all the way from colors, fonts, combination with other company brands, to even dictating background colors and how many inches/picas/pixels any other object can be displayed in proximity to the edges of the logo. Old-school brand lawyers typically go way overboard with all this stuff, trying to safeguard against genericization when the likelihood is that their brand name will never become anywhere near enough to household-recognition status to be worth worrying about.

Google’s flexibility in logo treatments was refreshingly free of such overdone legal restrictiveness, allowing them to do alternative treatments for holidays and other observances like the recent one for Halloween. If you look back through Danny Sullivan’s retrospective on the various years’ Halloween logos they’ve done, you can discern even more blurriness on their part about how they should protect their marks. Some years they’ve displayed the trademark symbol (“TM”), while in other years they label the treatment a sales mark (“SM”), and in recent times they don’t put any sort of protective notation on the logos at all.

While I love their whimsical flexibility about their logo treatments, when it’s coupled with all these other issues that can degrade the protectability of the mark, I think it could be a bit too risky.

Google gets a lot of name-recognition value out of this trend toward genericization since it’s making their brand a household name, but the danger they may be courting could be loss of one of their most valuable assets. Imagine if Yahoo and Microsoft could start setting up their search engines with the word “Google” splattered all over them, and what if the phone companies started saying in commercials, “…just google the person’s name into your phone and we’ll find their number for you!”

In any case, this little trend toward the Googlization of the universe hasn’t stopped yet, and it’ll be interesting to see how extreme it gets before the pendulum swings back the other way.

Then again, if we all become Google, perhaps legally safeguarding their trademarks becomes a moot point.

I’m going to sign off now as I Google my chapped lips, and mix up my Google puzzle cube before I Google a few friends to find their addresses for Christmas cards and then I’ll finish up by throwing my Google shirt in the wash and try to find where I put that Google signal-enhancer for my wireless phone. Oh, and I need to read my Google today to keep up with the news and weather!

Chris “Silver” Smith is Lead Strategist at Netconcepts and writes for the Locals Only column which appears on Mondays at Search Engine Land.

Chris Silver Smith
Chris Smith is President of Argent Media, and serves on advisory boards for Universal Business Listing and FindLaw. Follow him @si1very on Twitter and see more of his writing on reputation management on MarTech.