The finding that Republican presidential candidate and presumptive nominee John McCain is outspending (by 2x) Democrats Barack Obama and Hilary Clinton on issues as well as buying his opponents’ “brand terms” is one of the findings of a fascinating new iCrossing report, “How America Searches: Election ‘08 Update.” Here are the key findings from the […]

The finding that Republican presidential candidate and presumptive nominee John McCain is outspending (by 2x) Democrats Barack Obama and Hilary Clinton on issues as well as buying his opponents’ “brand terms” is one of the findings of a fascinating new iCrossing report, “How America Searches: Election ‘08 Update.”

Here are the key findings from the report:

Issues still of top importance to searchers. Eighty-seven percent of potential voters search on an election issue, and finding more information about a candidate’s position on a specific issue remains the leading reason they conduct candidate searches (85%).

Candidate search volumes are up. Obama holds lead nationally and in Pennsylvania. Candidate search volumes have increased greatly since the original How America Searches: Election 2008 report, with Obama leading the number of voter searches by a wide margin. This margin over Clinton is also seen in searches conducted in Pennsylvania in the run-up to that state’s Democratic Primary.

More women turn to the Web to learn about candidates and issues. The original How America Searches: Election 2008 report showed that men conducted election research online at much higher rates than women (47% vs. 38%). Currently, both genders rely on the Internet equally for election-related information; 56 percent of men and 54 percent of women.

TV is the only media channel that now exceeds the internet as a political information source. As one might expect, trusted and branded news sites (newspapers, TV networks) are the greatest draw for people looking for information. Search engines are often used to discover more information about issues.

Here are two interesting charts showing top issues searched for and a breakdown by gender: 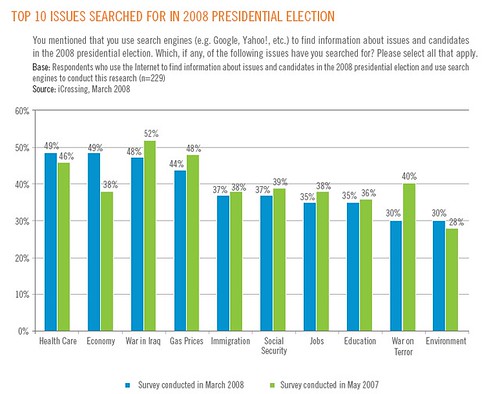 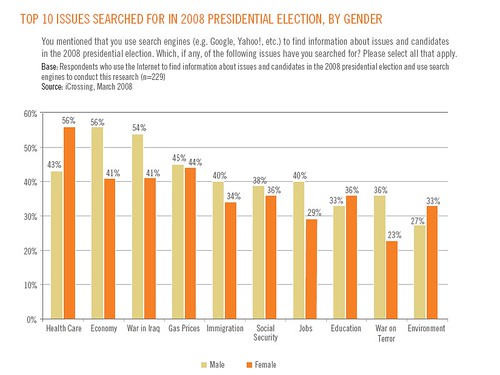 As mentioned, Barack Obama is the candidate winning in terms of overall search volumes. According to the report he also dominates natural search on a range of high-profile issues. While all the candidates fare poorly in the execution of their paid search strategies, John McCain is outspending Obama. He is also the only candidate doing issue-oriented paid search advertising despite the fact that this is where the search volume is.

The report is a follow up to a similar study from July, 2007. A copy can be obtained here.