Google Blogoscoped reports that Google News has added a link to the left bar that enables you to view an image version of Google News. I suspect Google found out that a picture, really does, tells a thousand words.

If you mouse over an image, the news on the right hand side scrolls to focus in on the news related to that picture.

Here is a screen capture of the image version of Google News. 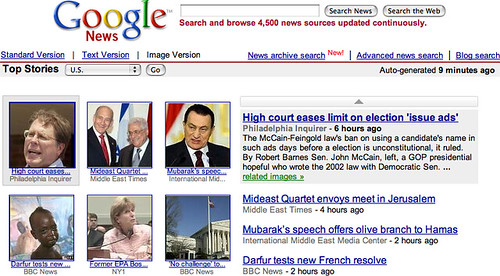 There is also a text version of Google News, if images are not your thing.

Google’s Gabriel Stricker sent me some more information about this:

Google News Image Version allows users a better way to “see” the news. And it is true: sometimes a picture really is worth a thousand words.

This is an exciting new way for our users to browse the top news of the day and then dig down on the details by going to the source of the image to read the full story. In the same way that Google News users can find multiple versions of a story today from various sources, now they can find multiple images from those same sources.

Google News Image Version gives users a visual representation of the “Top Stories” section of Google News. When a users mouses over a image, the corresponding headline will be highlighted on the right. Similarly, when a user mouses over an headline, the corresponding image will be highlighted. Users can click “related images” for some stories to see similar images and stories to the one they are interested in.

Postscript: The Google News Blog now has an announcement about the new feature.

Postscript 2: Google China news searches now focus on images from Reuters suggest the new feature might have been prompted by a similar feature from Google-rival Baidu.