Many people I speak to still ask the familiar question, “Is this going to be the breakout year for local?” while expressing frustration or disappointment that “local hasn’t yet lived up to expectations.” But local is a marathon, not a sprint. It’s also more complex than the general search market, which features an ecosystem built […]

Many people I speak to still ask the familiar question, “Is this going to be the breakout year for local?” while expressing frustration or disappointment that “local hasn’t yet lived up to expectations.” But local is a marathon, not a sprint. It’s also more complex than the general search market, which features an ecosystem built around a small number of large and highly visible companies. Even though many of those same companies are focused on local, one could almost flip that equation when discussing the local internet: it’s about a very large number of mostly small companies.

In the spirit of that “Is this the year?” question, I thought that for the first Locals Only column of 2008, it’s worth taking stock of where we are and what the coming year likely holds for local.

Internet now a primary medium for local consumers
Study after study has confirmed that consumers research products before buying (mostly offline). However, perhaps more strikingly, the internet has now surpassed the venerable print yellow pages and newspapers as the primary local resource for consumers looking for services. This is not to say that print newspapers and yellow pages don’t have meaningful usage anymore, but we’ve reached an important “tipping point” of sorts.

The two studies that independently reflected this shift in 2007 were from TMP Directional Marketing-comScore and WebVisibile-Nielsen. Both studies showed search and/or the Internet generally as the medium with the greatest reach among U.S. consumers for local information: 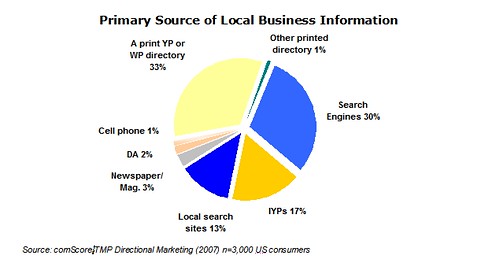 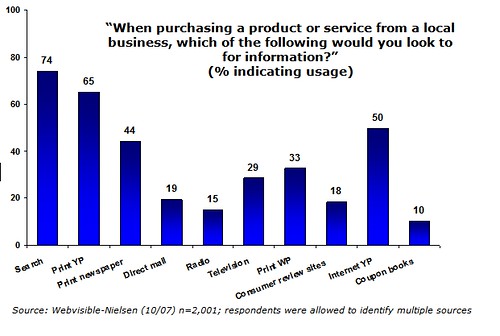 Accordingly, the internet is now a critical consumer resource that drives increasing volumes of offline (local) transactions, whether for products or services.

More product inventory information coming online
Though it’s uneven and not always accurate, the depth and volume of product inventory information online is gaining. There have been tremendous strides over the past couple of years, and this year should see local inventory information become even more common and widely proliferated online (and in mobile). More retailers are adding popular “buy online, pick up in store” capabilities. This requires a real-time inventory database, which can then support syndication and distribution of that information. Furthermore, a growing list of companies is making headway on the problem of helping consumers find where they can buy desired products locally. As I’ve written before, this expanding group includes: ShopLocal, TheFind, StepUp/Intuit, NearbyNow, Krillion, Where2GetIt, Channel Intelligence, Yokel, GPShopper, AskTheLocal, and a few others.

Mobile is an especially interesting distribution channel for inventory information. However, by the end of 2008, consumers should see a great deal more “real-time inventory” information available through search and on shopping sites.

Mobile poised for significant growth
Mobile may be the biggest (or highest profile) local story in 2008. While local search on mobile devices is not a mainstream phenomenon yet, it is growing. However, as an entry point for the masses, a range of “voice search” services (aka free directory assistance) formally launched in 2007: Google’s Goog-411, Microsoft’s 1-800-Call-411, and AT&T’s 1-800-Yellowpages joined Jingle Networks’ established 1-800-Free-411 in giving people voice access to local listings on the go. And all the major search engines are offering upgraded or improved mobile applications and/or WAP search. Google also introduced “My Location” for Google Maps for Mobile late in 2007.

The iPhone, iPhone imitators, and Google’s Android platform (and now Yahoo!’s open mobile platform) promise to continue to shake things up in 2008. If Google wins the 700MHz spectrum auction in Q1, that will also be significant for local mobile search. Indeed, local is one of the key content categories in mobile, and GPS/Wi-Fi or cell-tower triangulation makes locating the user more precise for both services and ad serving.

Better local targeting coming for advertisers
Reverse IP “sniffing” has served geotargeted advertising relatively well, although many disparage its accuracy. But IP lookups don’t support zip/postal code-level or more precise geotargeting. A variety of companies are working on “more granular” targeting strategies and technologies. As a practical matter, however, getting better local ad targeting online involves a patchwork of approaches that includes Wi-Fi triangulation, embedding location into the browser, default location settings, personalization, and working with ISPs. The effect of all this, however, will be better local ad targeting in 2008.

And because of inherently greater local precision in mobile, we’ll see an acceleration of local search and locally targeted ads in mobile this year. 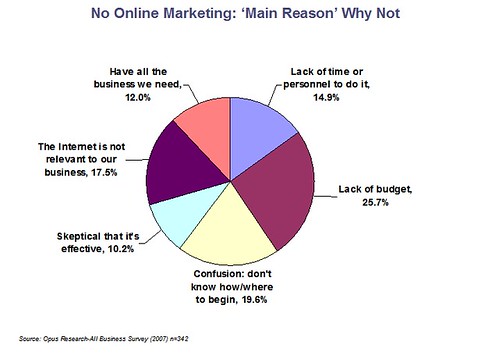 This is only one datapoint, but it reflects the confusion and ignorance about online advertising that is still pervasive among small businesses. However, in 2008 we should see many more small businesses embrace the Internet with the aid of aggregators and enablers (yellow pages, newspapers, webhosts), agencies, and local SEMs. There will also be further simplification of advertising options from the search engines themselves (e.g., SimpleAds from Google).

Building more trust into local UGC
One of the big stories in local in 2007 was the rise of user-generated content and the increasing importance consumers placed on ratings, reviews, and recommendations. This isn’t a local-specific story, but local is where much of this activity plays out. Now that user-generated content has been fleshed out on many local sites, making better sense of and building more trust into that content will be the next phase of development. Once there are more than about 25 reviews of a particular local business, hotel, etc., content becomes confusing to sift through (unless there’s a clear consensus). That’s why devices like summaries, sentiment analysis, ratings guides, consolidated scores, and “my network” become important this year for those local sites that have lots of UGC (e.g., Yelp).

More mapping competition and innovation
One of the most dynamic areas in local has been online mapping, which has moved from a static medium to an extremely competitive and innovative area in the past two or three years. We should continue to see mapping expand as a “platform,” with more content layers and types being integrated (e.g., video) into maps online. Google Earth and Maps will continue to move closer together, Google’s StreetView will continue to expand coverage, and Microsoft should launch an expanded version of its answer to StreetView, StreetSide (which actually predated StreetView). Online mapping will also continue to develop as a user-generated content and collaboration medium (e.g., My Maps), with the net result being much richer local content for consumers.

We may also see independent companies such as Everyscape gain attention and give some of the larger players a run for their money.

More launches and failures in local
This past year saw the sale or demise of three relatively high-profile local sites: Backfence, InsiderPages, and Judy’s Book. Backfence folded, InsiderPages was sold, and Judy’s Book may be sold. To some degree, all these sites suffered their respective fates because of impatient, frustrated, or disappointed investors who had lost faith in these sites and their ability to deliver on their original promise. Indeed, most investors, VCs in particular, don’t have the patience to allow local startups to develop over time, which is what the market requires for true success.

But there’s also the very real problem of monetization. Every entrepreneur that thinks he or she can survive by “selling ads to small businesses” has got another thing coming. A few sites, with enough traffic and visibility (especially in selected verticals), might make this work, but most cannot because of the fundamental challenges of reaching out to small businesses. Eventually, however, there will be sufficient access to local advertising inventory (nationals and/or SMBs) that the monetization challenge for local entrepreneurs will be less than it is today. This year is probably not the year that comes true.

While we should see more local failures accordingly, these fundamental problems won’t deter a new crop of entrepreneurs who feel that “nobody has gotten local right yet” — especially in vertical categories. In addition, the many billions in traditional local media spending and small business advertising offline will continue to make the local internet a very attractive, if incredibly challenging, market.

Greg Sterling is the founding principal of Sterling Market Intelligence and a senior analyst at Opus Research’s Local Mobile Search program. He publishes Screenwerk, a blog focusing on the relationship between the Internet and traditional media, with an emphasis on the local search marketplace. The Locals Only column appears on Mondays at Search Engine Land.